The History of the 2nd Infantry Regiment, California State Militia 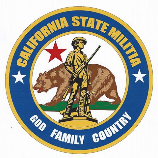 The 2nd Infantry Regiment, California State Militia began in 2012 when 3 members (Jackson, Clayton, and Hernandez) of the 1st Regiment, CSM decided to form, out of a need for standardized training and a shift in goals, to support our state and provide standards that were easy to identify.

The formation of the 2nd Infantry Regiment is well documented and archived historically to prevent false claims of association and also prevent a misunderstanding from the public regarding our mission, goals, and leadership.

The founders of the 2nd Infantry Regiment developed defined written standards of training, ByLaws, and an overall focus on the safety and protection of our communities rather than political statements and actions.

Since 2012, the 2nd Infantry Regiment has grown from one company in Southern California to 10 across the entire state of California and has been reduced to 4. Throughout our organization's history, units have been activated and deactivated (See press release for specifics) based on unit membership and function. A history of lineage of each unit is maintained by the Regiment Historian. Each unit is independent yet joined in the common goal of protection of our communities and state.

In 2020, certain units of the 2nd infantry regiment were deactivated from our organization by consensus with all leaders, to protect the goal of the unit as a defensive force rather than an aggressive organization.

Specifically, the 2nd Battalion and its subordinate units, C, D, and E companies were removed and disavowed specifically for behavior that was interpreted as potential inciteful and militant in violation of 2nd Infantry Regiment ByLaws  (See News section for details October 2020 press release)

We renamed ourselves temporarily to the California State Militia Volunteers to ensure the negative effects of those units could be evaluated and further allow our organization time to reorganize effectively. In February 2021, our organization reclaimed the moniker of 2nd Infantry Regiment, California State Militia, with 1st and 3rd Battalions, realigning our original founding unit back to our roots, and continuing with our mission which focuses on community service as it always has.

The 2nd Infantry regiment was reorganized in May of 2021 into a single regiment with 6 companies. The regiment operates under a command staff of a Regimental Commander and 2 adjutants providing guidance and oversight in conjunction with the Command Committee on all matters regarding the operations and standards of the Regiment.

As a measure of Record, linage and honors is maintained to provide a historically accurate accounting of unit designations, assignments, and status within the 2nd regiment.

There are several "unorganized" Militias in CA. They operate their own self-determined rules and regulations. The 2nd Infantry Regiment, California State Militia does not align, participate, report, nor train with these militias. Deactivated units of the 2nd Infantry Regiment may or may not claim to be a part of the Regiment, however, at this moment, only units identified by our command committee are officially claimed and activated units within our organization.

Membership in the California State Militia, 2nd Infantry Regiment is open to all citizens regardless of race, sex, religion, or political affiliation.

Units NOT open to public membership and/or which are organized for any purpose other than the support of Constitutional principals and community service may be considered private armies and are NOT to be confused with the Constitutional "unorganized" militia.

As a practical matter, we allow only citizens of good character in the militia.

We are not "For Hire", and will not participate in a "Call to Arms" but can respond and assist in community disasters and strife if requested or needed in our state.

All who advocate criminal activity, terrorism, revolution, or a change from our republican form of government are not accepted in our organization.

Our members should understand the duties and obligations of both citizens and government under our Constitution.

Joining the California State Militia is entirely voluntary and as such our members have the right to resign at any time.

You have installed an adblocker. This Web App can only be displayed and edited correctly when the adblocker is disabled.